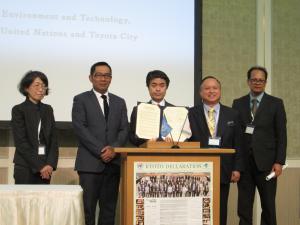 Special Ceremony for Signing Addendum to Kyoto Declaration
16 Jan 2015 - 16 Jan 2015
Toyota, Japan
UNCRD organized the Special Ceremony for Signing of Kyoto Declaration on the Promotion of Environmentally Sustainable Transport (EST) in Cities on 16 January 2015 during High-Level Symposium on Sustainable Cities: Connecting People, Environment and Technology, co-convened by the United Nations and Toyota City.

Following the adoption and signing of the Addendum to Kyoto Declaration at the Eighth Regional EST Forum in Asia, held in Colombo in November 2014, 6 Asian cities participated in the High-Level Symposium in Toyota City, had endorsed and signed the Addendum at the ceremony.