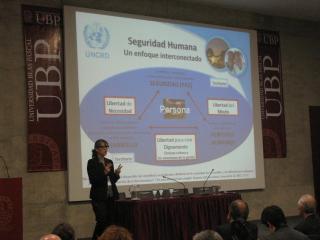 III International Congress on Integrated Management of Water
6 Oct 2010 - 7 Sep 2010
Cordoba, Argentina
Under the framework of the capacity building programme on human security and integrated regional development for the Central Region of Argentina (initiated in 2008), UNCRD-LAC´s coordinator was invited to deliver the introductory keynote of the III International Congress on Integrated Management of Water. Through a conference entitled “human right to water and to human security” The Congress was aimed at facilitating a forum for discussion for the definition of multidisciplinary and inter-institutional projects related to the integrated management of water resources, and to promote suitable educational means to raise awareness of the causes and effects of the increasing shortage of usable water resources.

Main emphasis of UNCRD´s contribution to the Congress were: (a) discussion about the links between Human Security, Territorial Security and Regional Development, and the critical relevance of “water” for human security; (b) discussion about water as a human right, the strengths of regional development as a multidisciplinary instrument for the integrated management of water resources, building a culture of water (under a human rights framework), and a framework of rights and obligations (responsibilities) of the public and private variety of regional stakeholders that have a role in both: generation of conflicts and of solutions; (c) promotion of wide debate about the role of water for human security, territorial security and climate change; (d) ample interest generated in the audience and the media where UNCRD-LAC coordinator C. Hoshino was interviewed by Canal 12 (TV) the biggest of the Province of Cordoba, Canal C (TV of the Province and Cable transmitted to the LA Region), Dia a Dia (Press), and the University of Blas Pascal (Cable transmitted by satellite in Argentina).

As a result of contacts made and information exchanged during the Congress, UNCRD-LAC will continue its collaboration in the implementation of an international training programme on human security and regional development for the Central Region of Argentina, and in its expansion to local and regional government officials of Latin American countries, in cooperation with the Latin American Organization of Intermediate Governments (OLAGI Spanish Acronym) and the University of Blas Pascal. On the other hand, UNCRD-LAC will assess possibilities of participation in the UNESCO University Chair, awarded to the University of Blas Pascal, highly based on the human security and regional development programme implemented by UNCRD-LAC.