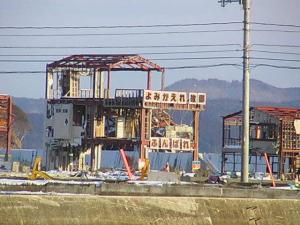 Related News
UNCRD Workshop in Tohoku
27 Feb 2012 - 2 Mar 2012
Nagoya and Tohoku region (Iwate, Miyagi and Fukushima), Japan
The Great East Japan Earthquake, which affected a wide area of East Japan on 11 March 2011, was unprecedented in its scale and nature. The earthquake was the fourth largest in the world and the largest ever recorded in Japan. The subsequent tsunami hit the Tohoku region along Japanâ€™s Pacific coast and washed away many towns and communities, resulting in massive loss of lives and property. Full recovery and reconstruction is likely to take many years, but considerable efforts are being made and the region is seeing substantial progress. There is a great deal to learn from this experience for future disaster risk reduction and sustainable regional development. The recovery work has been progressing steadily and is now shifting to reconstruction. However, as these efforts have just started, there is an urgent need to look into the issue of unemployment in the Tohoku region, in particular among the young generation and among women as a whole. The promotion of business opportunities is also an area of vital importance.
Against these backdrops, UNCRD, financed by the Ministry of Foreign Affairs, Government of Japan, organized workshops and site visits in three prefectures in the Tohoku region (Iwate, Miyagi, and Fukushima) from 27 February to 2 March 2012. UNCRD engaged eleven experts from both inside and outside Japan and visited local governments and communities. The workshops were intended to share the experiences of community reconstruction from the Great East Japan Earthquake and Tsunami and to exchange information among representatives of local communities and experts. Practical ideas were also exchanged to support the economic activities of local communities, particularly on community-based eco-friendly industries. In addition, exchange of information was undertake regarding the role of NGOs and NPOs in reconstruction efforts.
Following the Tohoku Workshop, UNCRD drew up a list of all the recommendations received from the experts. The key points could be summarized as â€œDefining a vision in reconstruction plans,â€ â€Industrial reconstruction,â€ â€œRestoration of the ecosystem,â€ â€œCollaboration with NGOs/NPOs,â€ â€œCollaboration with the private sector,â€ and â€œCollaboration among local communities.â€ The experts who participated in the Workshop came from diverse backgrounds and for this reason, these recommendations cover a range of issues. We hope that they will further stimulate discussion and be applied in practical ways.
UNCRD compiled the information derived from the workshops in a report, with the aim of information dissemination to the rest of the world. This report includes the details of the workshops, results of site visits, and recommendations of experts. UNCRD will also reflect experiences and lessons derived from the workshops in its training programmes which will be planned for government officials of developing countries.
It is our hope that this report will help stimulate discussions on this topic and assist in the overall efforts of reconstruction as well as from a basis for wider discussions on this important topic..
While working on this Workshop, UNCRD has also been collecting case study data in the aforementioned three prefectures in the Tohoku region. The data will be released on the UNCRD website shortly. We intend to widely utilize information derived from this Workshop and the case studies in UNCRDâ€™s future activities and will also maintain the usual ties that have been established with the people of the Tohoku region through this Workshop. More Information
Background papers
Publications
Copyright (c) United Nations 2012-2017 | Terms of Use | Privacy Notice | Contact