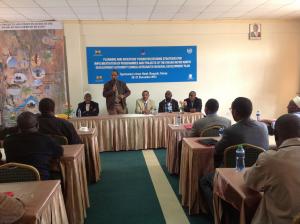 
The Ewaso Ngiâ€™ro North Development Authority (ENNDA) is one of the six regional development authorities in Kenya charged with promoting integrated and sustainable social, economic, and political development in their areas of jurisdiction. ENNDA covers a vast region in north and northeastern Kenya and also covers the largest area compared to the other regional plans. This region constitutes the Arid- and Semi-arid lands (ASALs) ecological zones of Kenya. Aspects of this region such as scarcity of water for livestock and domestic use which has worsened the effects of aridity and prolonged droughts, has contributed to economic and social underdevelopment with unusually high levels of poverty that pervade all sectors of its society.

Pastoralism constitutes the main economic activity that underpins and supports the livelihood of many communities in the ENNDA region even though this activity is not practiced sustainably. Scarcity of water for livestock, domestic use, and pasture for grazing their livestock constitute the bane between communities and clans in the region who compete aggressively with each other. Despite the support structures developed by these communities themselves to enable them cope with a varied number of problems ranging from issues dealing with harsh ecological problems, traditional conflict resolution to traditional resource management, these structures have become weak rendering them ineffective. Governmentâ€™s lack of planning and investment in infrastructure (roads) and social services (water supply, education, health) at regional level has increased the problem of under development and poverty in the region This has fueled frequent and more fierce inter- and intra- community and clan conflicts over meager resources that are now the norm and worsening by day.

In 2003, as a result of regional underdevelopment, the Government of Kenya embarked on various policies to address the daunting challenges of development in ASALs. First the government implemented the economic recovery strategy for wealth and employment creation (ERSWEC) from 2003 to 2007. In 2008 the government launched Kenyaâ€™s Vision 2030 which is a long-term framework for national, regional, and local development. The vision has economic, social, and political pillars which provide a basis for long-term socio-economic development policy, strategies, and programmes in the country in general and other marginal areas such as ASALs in particular.

ENNDA has taken advantage of the new policy environment and embarked on formulating a long-term regional framework running for 30 years to guide natural resource development and effective utilization of resources to spur economic growth and eradicate poverty. However, ENNDA lacks requisite institutional capacity and trained planners in appropriate skills to effectively execute the strategies of the plan. Therefore, ENNDA requested UNCRD Africa Office for a technical assistance programme to build its human and institutional capacity for effective regional development strategies and plan preparation.

Toward this goal, UNCRD Africa Office designed a capacity building programme to train the planners and development managers of ENNDA on emerging concepts and approaches to regional development as well as to support them in preparing an integrated regional development plan. The technical assistance programme was implemented since 2004 focusing on enhancing the knowledge and skills of the planners as well as institutional capacity of ENNDA for effective regional planning and implementation. The programme was organized around two closely related and reinforcing components, namely: (a) training; and (b) preparation of a regional plan.

After conducting a number of training workshops and data collection analysis, the regional plan for ENNDA was published and launched on the 28th and 29th of June, 2012. The plans implementation and effectiveness is one of the major issues now for ENNDA to ensure that it response to the felt needs of the region. In this regard, UNCRD and ENNDA will organize a workshop to discuss on the implementation strategies that and projects will apply in the process of executing the plan of ENNDA scheduled for the 5th and 6th of December 2013.