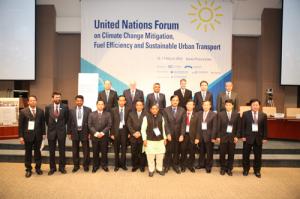 As an integral part of the UN Forum, the Special Event of Asian Mayors for the Signing of the Kyoto Declaration for the Promotion of Environmentally Sustainable Transport (EST) in Cities was jointly organized by UNCRD and the Ministry of the Environment, Government of Japan (MOEJ). These 10 new signatories have brought the total signatories to 44 Asian cities.