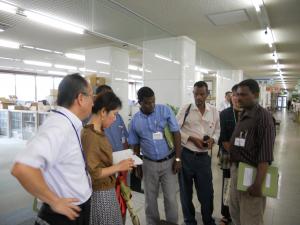 
The decentralization was initiated in Ethiopia in 1995, when the federal government was established. Under this reform, each of the regions was authorized to prepare, approve, and implement its own plans and budgets in accordance with its region-specific situations, as well as the national key policy objectives. Additionally, since 2002, fiscal decentralization at the woreda (district) level has also been underway. As a result, about sixty percent of the total regional budget is currently allocated to the woreda level in the Oromia Regional State. However, planning and budgeting capabilities at the woreda level are still inadequate. The region and its lower administrative level of zones have not provided woredas with sufficient managerial and technical support. Thus, it is increasingly important to strengthen the capacities of woredas to prepare plans and compile budgets in response to the fiscal decentralization process.

In the meantime, the Government of Ethiopia has launched a new initiative for “growth and transformationEunder the next five-year plan to encourage, not only public, but also private investment, both domestic and foreign, in infrastructure development and manufacturing activities. It is obvious that Oromia, which is the largest region both in terms of population and geographical size, would attract a substantial portion of such investment. Thus, the Oromia Regional State needs to be able to allocate and use this expected flow of private funds in an effective and balanced manner, in addition to the decentralized public funds from the federal government. In view of this situation, the Government of Ethiopia requested UNCRD, JICA, and International Development Center of Japan (IDCJ), through the Government of Japan, to undertake capacity-building in order to strengthen multi-sectoral planning and budgeting capacity in the Regional State of Oromia. During the reporting period, two training courses entitled "Strengthening Multi-sectoral Planning and Budgeting Capacity in Oromia Region, Ethiopia" were conducted from 21 August to 1 September 2011 and from 15 to 26 April 2012.

The objectives of the training courses were to introduce the structure of Japanese local administration to regional/zone/woreda planners and to provide them with knowledge about how Japanese local governments, which are equivalent to woredas, implement planning, budgeting, and M&E. An additional purpose was to enable the planners to prepare a report/action plan to effectively utilize the findings of the training courses. The overall goal is to strengthen multi-sectoral planning and budgeting capacity in the Regional State of Oromia as a whole in order to use the decentralized public funds in an effective and a balanced manner.

UNCRD trained a total of fourteen mid-level planners and experts from BoFED, ZoFED, and WoFED in the Oromia Regional State. These trained regional/zone/woreda officials will be involved in making guidelines/manuals for woredas in Oromia as well as preparing plans and compiling budgets based on adequate data collection and analysis. These actions will lead to strengthened capacity for multi-sectoral planning and budgeting in the Regional State of Oromia.